Both the Player and the Dealer are dealt two cards, face up for the Player, face down for the Dealer. These cards are known as pocket cards. This is followed by three community cards dealt face up in the middle for all to share, called the flop. The Player raises by placing a bet that is twice the size of his ante if he thinks his hand is better or folds if he thinks it isn’t. Clicking Fold forfeits the ante. Two more cards are dealt to the flop. Some or all the cards can be used to make the best poker hand possible. If you didn’t fold and the Dealer’s hand qualifies, both hands are compared to find the winner. The Dealer’s hand qualifies if it has a pair of 4’s or better. 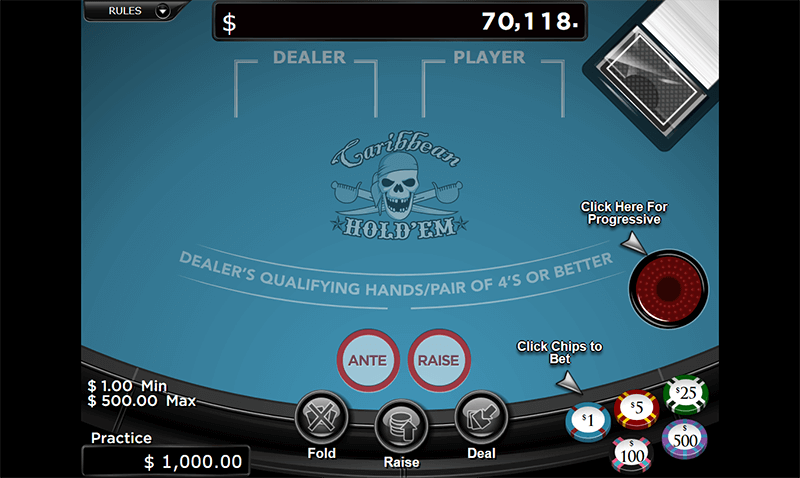 How To Play Caribbean Hold'em Poker 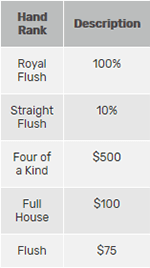 Card Values and Payout Amounts
Hands are ranked according to standard poker rules.

There are quite a few table games based on poker, but most of these games are based on 5-Card Draw. Not a lot of people play that game anymore. They’re playing Texas Hold’em for the most part, so how about a table game version? Here it is: Caribbean Hold’em. This game was first devised in the late 1990s, and today, you can find it at casinos worldwide, including online at Bovada Casino.

If you find regular Hold’em too intimidating, Caribbean Hold’em should be right up your alley. Not only are the rules and strategy simpler, there’s also a massive $112,000 progressive jackpot (shared between this game and Caribbean Stud Poker) waiting to be won at press time. Here’s how you can get in on the action.

How to Play Caribbean Hold’Em

The goal of Caribbean Hold’em is to get a better poker hand than the dealer, who must have at least a pair of Fours to qualify. If you’re unfamiliar with Texas Hold’Em poker hands, see below for the full range included in this table game version.

Now that you know how each hand ranks, it’s time to learn how to play Caribbean Hold’Em, using a simple two-set guide.

Step 2: Assess your hand against the flop. If you want to continue the round, hit the “Raise” button, which will put a second bet on the board that’s double your Ante. At this point, the Dealer’s cards are turned over, and the remaining two community cards are dealt. The winner is declared.

If you don’t want to continue the round, hit Fold instead of Raise. You’ll forfeit your Ante and end the round. As a teaser, you’ll still get to see how the round would have panned out had you raised instead.

The Caribbean Hold’Em Dealer may be automated, but that doesn’t mean he goes in for every hand. In order for the Dealer to take part in the round (qualify), he must have at least a pair of Fours—something you won’t know until the end of the round. The Dealer qualifying affects your payouts in the following three ways:

2) Dealer qualifies, and you win
This happens when Dealer has a pair of Fours or better, but you have a stronger hand. In this case, you win your Ante and Raise bets.

3) Dealer qualifies, and you lose.
When the Dealer beats you with at least a pair of Fours, you lose your Ante and Raise bets.

Knowing how each outcome pays is the first step to understanding how Caribbean Hold’Em works, but we still have to cover how much these bets pay. There are unique payouts for the Ante and Raise, so we’ll go through them individually.

Unlike the Ante bet, the payouts for Raise bets don’t depend on the strength of your hand; they always award even-money. You only get paid for your Raise when the Dealer qualifies. When he doesn’t, your Raise is returned as a push.

There isn’t a universal optimal strategy for Caribbean Hold’em, but you can improve your odds of winning by folding anytime you’re dealt two unconnected cards that miss when the flop is revealed; that is, you don’t have a Pair or a draw to a straight or flush, and your hole cards are lower in value than the community cards. For example, if you land a 9d4s, and the flop is a Jh2dAc, you haven’t connected with anything and should therefore fold. This should result in you folding close to 20% of your hands.

To win the entire pot, you must have a Royal Flush using your two hole cards and the three cards on the flop. In order to win a portion of the pot, you need to make any of the following four hands:

Caribbean Hold’em is you versus the dealer, best poker hand wins – the Dealer must have at least a pair of Fours to qualify. After you place your Ante, you get two cards face-up, the Dealer gets two cards face-down, and three community cards (the “flop”) are dealt face-up. If you like your hand, hit the Raise button to match your Ante bet. The Dealer’s cards are turned over, the remaining two community cards are dealt, and the winner is declared. If you don’t like your hand, hit Fold instead and move on. Payouts go up depending on the strength of your winning hand.

To qualify for the progressive jackpot in Caribbean Hold’em, make your side bet of $1 by clicking the shiny red button to the right of the screen. If you make a Royal Flush using your two hole cards and the three cards on the flop, you win the jackpot. A Straight Flush will earn you 10% of the jackpot, and you’ll receive fixed prize amounts if you make Four of a Kind ($500), a Full House ($100) or a Flush ($75).

There isn’t a simple optimal strategy for Caribbean Hold’em, but you can get close by folding anytime you have two bare undercards to the flop; that is, you don’t have a Pair or a draw to a made hand, and your hole cards are lower in value than the community cards. Think you’ve got what it takes? Give Caribbean Hold’em a try at Bovada, and we’ll see you on the felt.